Hmm, is that our states of mind, or the fact that we have been busy crafting beautiful Christmas cards?  Both, I think!!  And here to prove it are some gorgeous cards to inspire you to "go postal" with some handmade cards.  They took the next line of the song to heart: 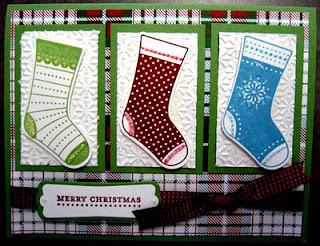 "on the Second day of Christmas, my crafter made for me...

TWO Christmas CARDS (and that pretty Christmas ornament to hang)…"

Pammie used embossed card fronts for both cards.  The first one uses pieces cut to frame each stocking, while the second card sports a full embossed card face.  Don't you love those stockings, rady to be filled with the magic of Christmas? 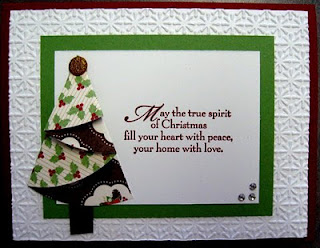 I also love the way Pammie folded her double-sided paper in the shapr of a Christmas tree on her second card--very innovative.  Looks like she used
a half circle and, starting with the bottom "limb",
folded the paper UP to form the top of the tree.  I tried it and it works with single-sided patterned paper as well.  It makes such a pretty presentation! 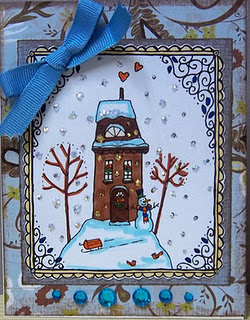 Next up is Linda, whose snowman and house is colored so beautifully.  I love how she gave the white snow just enough shading to give it depth!
Looks like she glitzed the falling snow with Stickles.  I could walk right up the hil and feel welcomed at the house--such a pretty scene.
The image is from Squigglefly and is called "Seasonal House on a Hill" by Rich Davis. 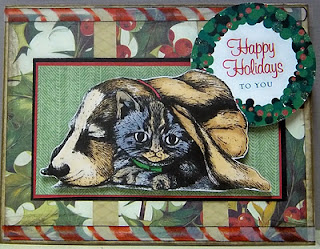 Her second card is one of true friendship in the family.  She framed her sentiment inside a wreath for extra impact, and it works well here, don't you think?
This image is also a digi from Squigglefly called
"Snuggle Buddies" by Lynne Stansbery. 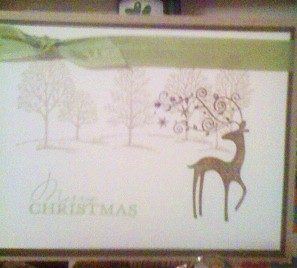 Diane also offers two cards for the season.  I loved layered stamping, and her stamping the trees "in the background" with her reindeer in the foreground is an awesome technique to try if you haven't already.  The card is Clean and Simple (CAS), another technique that is gaining popularity throughout the crafting world. 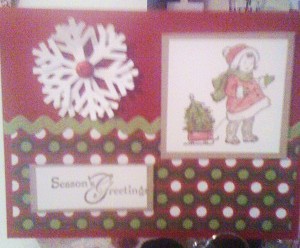 Here, Diane uses large diecut snowflakes to embellish her card, which really shows up against the red cardstock background.  Ricrac is a great way to mesh two patterns together, as seen here with the solid red cardstock and patterned paper.

All of Diane's images were stamped with Stampin' Up stamps.

SO...have you mailed off all your holiday cards yet?  Better get a move on,there are only 18 more postal days before Christmas!!
Posted by Pat at 5:00 AM